Our first week in the wild 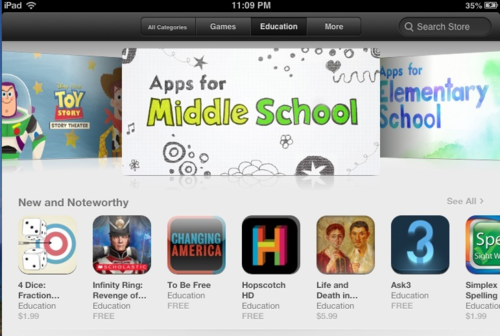 So, we launched Hopscotch last week, and it’s been quite a ride since.  It’s been downloaded more than 20,000 times, we cracked the Top 10 iPad Education apps, and were featured in New and Noteworthy on the App Store.  After the initial press we got all sorts of other great coverage on various ed tech blogs. We’ve had folks volunteering to translate it into nine different languages. We’ve had some totally awesome projects sent to us by parents and kids. And perhaps most importantly, we’ve begun our process of refining our feature set based on real data and feedback.

A lot of people have asked for if/then statements and variables, negative random numbers and collision detection (if one character touches another character, then run a script). A lot of people have also asked for ways to post and share projects. I had been agitating for message passing (notifications) as a way for the different characters to interact with each other—interestingly enough, nearly no one has asked for that.

Also, not as many people as we expected have asked for more tutorials and hand holding. This is probably because the ones that don’t immediately understand Hopscotch bounce before ever even giving us feedback. This is something we will be working on in the coming months as well.

Our users will be happy to hear that the next release of Hopscotch, which we hope to submit to the app store in the next couple of weeks, will included the ability to pick parameters for random numbers, program random colors, and include a sound event (“When I hear a loud noise”).

Until then, have fun, send us your projects, and make cool stuff!!

all of these things, yes. and message passing too, please!