on Pico Iyer’s The Man Within My Head. 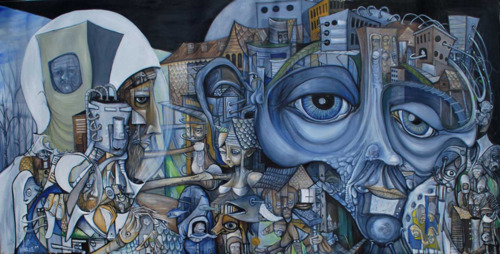 Raymond Chandler once said that great writing, whatever else it does, nags at the minds of subsequent writers, who find it sometimes difficult to explain just why they are so haunted by a particular work or author. The real mystery is not that an author takes up residence in our head, but why? Why this author and not that one? Why does Henry James haunt Colm Tóibín and Ruth Prawer Jhabvala, and why did he haunt Graham Greene? Why does Graham Greene haunt Pico Iyer, and Raymond Chandler haunt me? Most often we simply accept these hauntings without attempting to discover why a particular writer has so colonized our mind, because to do so would require an excavation of the unconscious that is not only hard work but often disturbing and, perhaps, impossible — like asking us to fully know ourselves while we are still in the process of becoming.

Is it that we see ourselves in the work of our shadow mentors – the traces of our own lives and sensibilities? Do they somehow supply us with the tools we need to tell stories of our own? Do we choose them, or do they choose us, taking up residence of their own volition? Do they, like love or other compulsions, become, as Pico Iyer suggests, “forces we can’t explain even to ourselves?”

This is exactly the sort of reckoning Iyer sets out to accomplish in The Man Within My Head, a book whose comely title plays off Greene’s first published novel, The Man Within. The book is a journey into Iyer’s own haunting by Greene, the writer who has most influenced his writing as well as his life. Part memoir, part literary excavation, part travelogue and existential inquiry, it’s a story about finding one’s voice as a writer and one’s place in the world (or lack of place). It’s a book about spiritual conundrums and dilemmas, and about fathers — both those we create as shadow allies, and those who create us (those real–life figures who become much more complex presences to deal with). Finally, it’s an exploration of the ways in which the power of affinity lies in its mysteriousness, how fictional and real worlds collide in the consciousness of a writer whose ghostly guide becomes more real in some ways than living people. The Man Within My Head is an investigation into not only what haunts us and why, but how what haunts us sometimes conceals what we most do not want to turn our attention to.