What about the man on the street?

From the great Morton Feldman

“My teacher Stefan Wolpe was a Marxist and he felt my music was too esoteric at the time. And he had his studio on a proletarian street, on Fourteenth Street and Sixth Avenue… . He was on the second floor and we were looking out the window, and he said, “What about the man on the street?” At that moment … Jackson Pollock was crossing the street. The crazy artist of my generation was crossing the street at that moment.”

Via Alex Ross’s wonderful The Rest is Noise

The first airplane didn’t work. It was too flimsy. But, because the problem he set out to solve was creating a plane he could fix in hours, he was able to quickly iterate. Sometimes he would fly three or four different planes in a single day. The rebuild, retest, relearn cycle went from months and years to hours and days. 18 years had passed since Henry Kremer opened his wallet for his vision. Nobody could turn that vision into an airplane. Paul MacCready got involved and changed the understanding of the problem to be solved. Half a year later later, MacCready’s Gossamer Condor flew 2,172 meters to win the prize. A bit over a year after that, the Gossamer Albatross flew across the channel. What’s the take-away? When you are solving a difficult problem re-ask the problem so that your solution helps you learn faster. Find a faster way to fail, recover, and try again. If the problem you are trying to solve involves creating a magnum opus, you are solving the wrong problem.

The point of abstraction

The point of abstraction

Don’t let talk of “Abstract vs. Concrete” in the industry misguide you.

I have been told many times, in different ways, that “the abstract” has less to do with the real world than “the concrete,” which supposedly deals with the practical, real world stuff.

However, I’ve recently concluded that this is a nonsensical claim, and I’m writing this article about it, because I think it is important that you know this. Otherwise you can be misled into confused design of computer programs.

William: Tiptree’s first story that she ever published was called the “The Last Flight of Dr. Ain,” and in it you follow this sad little dude with a runny nose and a bad cough as he flies all over the world and gets off to feed the pigeons. It’s a very short story. By the end of the story you realize his mission is to spread the plague because he’s seen what’s coming. It’s an extremely dark, dark little thing. That was her first outing. She was a CIA analyst.

There are two fundamental forces at work here: One is the loss of leverage, with more aspiring journalists than there are jobs and an environment in which content is becoming increasingly commoditized. The other is a shift in identity, with a generation of younger workers less familiar with unions who’ve built personal brands that they can transfer to other media companies. 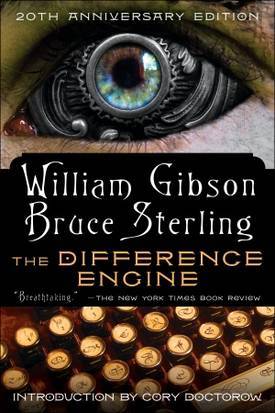 Hard to believe it’s been 20 years since the original publication of The Difference Engine, William Gibson and Bruce Sterling’s seminal cyberpunk alternate history about a Victorian England dominated by mechanical computers. I was privileged to write the introduction to this 20th Anniversary special edition, which also includes new material from Bill and Bruce about the book’s creation. It came out today, and I can’t wait to get my copy!