Developers and writers alike want games about more things, and games by more people. We want — and we are getting, and will keep getting — tragicomedy, vignette, musicals, dream worlds, family tales, ethnographies, abstract art. We will get this, because we’re creating culture now. We are refusing to let anyone feel prohibited from participating.

“Gamer” isn’t just a dated demographic label that most people increasingly prefer not to use. Gamers are over. That’s why they’re so mad.

The first piece of advice I have for people if they want to be a crazy artist like me is that companies are there to exploit you, and to extract as much labor out of you as possible while paying you as little money as possible. Always treat companies with intense cynicism and try to exploit them back as much as you can. The big mistake that will fuck you over in life is being a team player, because you’ll waste years and years of your life until you wake up one day having made some company a lot of money and having made yourself shit….they will just take your hard work and talent to make money for themselves and discard you when you’re no longer useful. So be very cynical.

Video Games, Misogyny, And Terrorism: A Guide To Assholes

Video Games, Misogyny, And Terrorism: A Guide To Assholes

There&rsquo;s something rotten deep within gaming culture. Andrew thinks it&rsquo;s time we cut it out.

This article is well worth a read. There’s been a whole bunch of shit going on with the targeting of women this week of which I have heard strangely only rumours. The women themselves (understandably) didn’t want to talk about it – Anita Sarkeesian noted on her Twitter that she had received threats and had to call in the police, but was now safe. This gives a very thorough account, passionately written. Lines such as:

What we’re seeing is the gamification of a social struggle.

Seem to cut to something fundamental in what can seem a bewildering onslaught of mind-bogglingly unacceptable behaviour. Yes, it is because they view it as a game. And because they are the ones with the privilege, they are free to do so. They are free to engage without emotional connection. To treat it as not real, or not really mattering. Because they have no idea what it is like to be on the other end of that. To them, it is a battle for territory that must be defended, because… uh… well, if you have something in a game, you defend it, right? That’s what you do.

Nevertheless, some comments make this stand out as something obviously written by a man – by someone on the outside looking in with horror:

Before the internet, this didn’t happen

I’m sorry, Andrew, yes it did. Men did view women’s lives and issues and ambitions and dreams as something to be totted up and scored against. 4chan is not the first echo chamber. You think gentlemen’s clubs, boardrooms, even playgrounds haven’t been echo chambers before? Men have been listening to themselves and ignoring the reality of women’s lives and needs and treating them as pawns in games for a long, long time.

I say this not to knock Andrew. This is a good article in many ways. A thunderingly reassuring article. I was reading it thinking ‘This is great. Finally people are listening to what an awful and impermissible situation this is!’ I was thinking about recommending it to everyone I knew. And then I stopped and asked myself why.

But guys aren’t ‘people’. People have recognised that this problem exists for years. Decades. The last time I can remember gaming and not having had boys tell me gaming wasn’t for me and I didn’t know what I was doing (often in very harsh terms) I must have been… five? six? And I probably only didn’t have that earlier in that my family was a bit ahead of the game in terms of having a computer at home.

And this whole gaming thing is just an extension of what goes on in the rest of our lives. It happens when we walk down the street. The name calling, the lewd suggestions/demands. And it’s not that rare for that to include threats of violence, and of sexual assault. Or for that to end in violence or sexual assault, even death.

Yes, in an explicitly gaming environment the game/territory aspect of it does get upped. But I think the real difference, what’s really making men shocked now, rather than at an earlier time, is that they are aware of it.

They’re starting to see quite how much of it we endure. Because it’s right there on the page in black and white. It’s not when we’re walking alone. It’s not when you didn’t even notice you it because it was said with such a casual tone. This stuff happens every day where you can’t see it, and it happens right under your nose. And men who think they are good men – not sexist – encourage it or even join in, because tone and familiarity and male bonding with physically present males casts it in a light that makes it seem OK. Not that serious.

You literally have no idea how much this goes on in all arenas of life outside this one area to which your attention has finally been drawn.

And it’s good that it’s been drawn. And it is shocking and appalling. And the extent of the suffering women like Anita Sarkeesian endure is part of a culture that needs some serious overhaul.

But I feel like it’s important to stress that women have been threatened and beaten up and raped and killed for daring to voice opinions before. Gaming is not isolated. It is part of a culture of misogyny where men don’t view women as real and where rape is trivialised and… UGH.

I wasn’t going to write a great long screed about this.

I was gonna point at the article, say it had its flaws, but was good and worth reading, but here I am again.

And this is why I think the article stood out to me even though I was slowly accumulating flaws – the kind of flaws women aren’t allowed to get away with when we speak on these matters – as I read through: because what stood out was not the content or the passion or the articulateness. What was different is that when it comes from women it’s something we have all heard a million times before, and are used to tuning out. And that us women who write about misogyny are tired to death of repeating and seeming to make no difference.

And it makes me mad that a man’s voice can seem new and fresh even though lack of intimacy with the subject matter means a well-meaning man misses IMPORTANT things and reaches conclusions that are way shallower than we need them to be. But at the end of the day I am tired, and it is nice to hear a guy speaking up where our voices are not heard.

And I am conflicted about that. But I’m too tired to say anything else right now.

Go read the thing. Then watch a Feminist Frequency video, why don’t you. 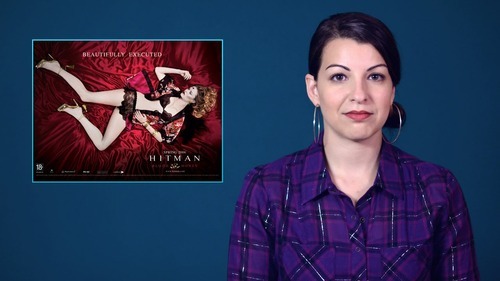 Anna Sarkeesian’s brilliant, crowdfunded Tropes vs Women in Video Games web-series (previously) has a new episode, Women as Background Decoration: Part 2 [TW: rape, sexual violence, violence], which expertly dissects the use of violence against women, especially sexual violence as a lazy means of establishing skimpy motivations for player characters to hunt down the baddies.

Computed Copy by Nukem, So Kanno and yang02 of gokinjo-monozukuri.org

“Although there is a traditional way of designing flat patterns which considers the movement of the body and characteristics of the material, computers design it in a totally different way, because they recognize the 3D shape as a polygon which is a collective form of flat faces.

Our purpose for this “Computed Copy” is not only to make some distortion which humans cannot produce, but also to make garments which are not just “copy” and have the alternative creativity. By removing humans’ arbitrariness as much as possible from the process of copying designs, and by letting computers do it, we can create a new kind of designing system.

In the future, we think that it will be possible to copy a garment only with the image files on the internet without scanning actual things, thanks to the rapid development of 3D technology (scanning, modeling, and printing) and a flood of images on the internet. We expect that this work will be the fastest automated way of copying the designs as the final destination of fast fashion.”

Since I’ve started posting low poly models I’ve been asked a lot about how I make them. Hopefully this video will clear things up! The first half has me explaining techniques and the second is a 2000x speed recording of me making a more complex model (real time: 5 hours)

Why do I check Twitter before bed? It only makes me angry.

The thing I did for MIT arrived.

Digital tools have a mind of their own: yours

First, they allow for prodigious external memory: smartphones, hard drives, cameras, and sensors routinely record more information than any tool before them. We’re shifting from a stance of rarely recording our ideas and the events of our lives to doing it habitually.

Second, today’s tools make it easier for us to find connections—between ideas, pictures, people, bits of news—that were previously invisible.

Third, they encourage a superfluity of communication and publishing.

This last feature has many surprising effects that are often ill understood. Any economist can tell you that when you suddenly increase the availability of a resource, people do more things with it, which also means they do increasingly unpredictable things. As electricity became cheap and ubiquitous in the West, its role expanded from things you’d expect—like nighttime lighting—to the unexpected and seemingly trivial: battery driven toy trains, electric blenders, vibrators.

The superfluity of communication today has produced everything from a rise in crowd-organized projects like Wikipedia to curious new forms of expression: television-show recaps, map-based storytelling, discussion threads that spin out of a photo posted to a smartphone app, Amazon product-review threads wittily hijacked for political satire. Now, none of these three digital biases is immutable, because they’re the product of software and hardware, and can easily be altered or ended if the architects of today’s tools (often corporate and governmental) decide to regulate the tools or find they’re not profitable enough. But right now, these big effects dominate our current and near-term landscape.