Sylvia is one of my favorite young women in STEM (or STEAM, as she likes to call it – adding ‘Art’ to the equation); she’s the host of a show called Sylvia’s Super-Awesome Maker Show! I first learned about her from her excellent exploration/tutorial on squishy circuits (I was a bit nervous about building my first circuit…) and now she’s bringing a cool painting robot to life through kickstarter. It’s like a CNC router, but instead paints what you draw on the computer with watercolors!

I really, really hope lots of young girls are seeing her videos on youtube and maybe making some of their own experiments at home or at school! She’s a great inspiration for makers of all shapes and sizes and skills!

Woohoo, Always been a fan of Sylvia’s. so glad to see she’s got her invention on kickstarter

Using Hempcrete construction, Team Hemp House, is going to build a hemp demonstration house in Colorado. “The intent is to show that we can use hemp to build the foundation and the walls and the tiles, but also the furnishings in the house, including the food in the fridge. #hemp #sustainable #food #fuel #clothing #shelter #HempItsIndustry

Somewhere near where I live. To see and learn…

Master printer, book maker and founder of Greentree Press, Jack Stauffacher is a American National Treasure.  Today he came in wearing a suite of camel linen,a  silk scarf and bowtie.  When I thanked him for wearing the fresh flower in his lapel he said, ‘It really does make the difference.’  At 94 he is still thriving and working everyday in his space, full of ephemera, antique wood block lettering and his own type faces he designed in the 50’s.  He is working with his team to archive his materials to eventually go to Berkeley. The day I  moved my studio into the building I poked into his space to introduce myself. He not only showed me around his space but he out of the blue gave me an original print from his show at MOMA and signed it, as a welcome to the building.  It is a treasure to me and I keep it up on my board where it serves as an inspiration.

Currently I am working on a set of letters to be worn around the neck.  Lord knows there are tons of versions of letter necklaces but I am inspired by Jack’s work and I am making them in the spirit of a time before digital fonts, a time when letters were hand drawn and hand cut.  I am looking to create a grain, a hand, imperfections not unlike the antique wood cut letters from antiquity.   The first few letters I have made are in the traditional and clean Gill Sans.  They are off to the caster and I cannot wait to get them back next week. 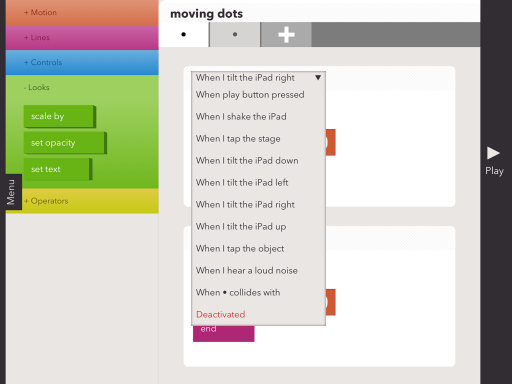 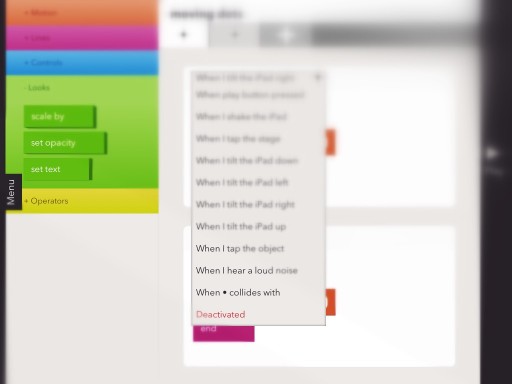 collision detection syntax in Hopscotch is expressed within each sprite deep in a drop down menu.

I’ve got a friend who is a high school athletic trainer. As she was looking for examples I thought of this post from Austin Kleon. I’ve used the gif in my classroom for journal topics, but haven’t done much past that. Has anybody used them in a science class or physics?

I was delighted when @EdwardTufte, the data visualization guru, posted on Twitter about the merits of animated GIFs over video when doing analytic work.

Jonah Weiner in his piece on the “glorious GIF renaissance,” wrote that while animated GIFs might seem like nostalgic, throwback, internet junk food, “they perform distinct functions that other formats can’t.”

One thing the GIF does well is “the money shot,” or “the payoff,” or the “Did you see that?” moment:

There is an appealing economy to these GIFs. They get to the point instantaneously, and at the exact moment when one feels the impulse to rewind and watch the climax again, the loop restarts right where it should. In the two minutes it might take me to load a viral video and watch it in full, I can watch the money shots of 15 different viral videos. Yes, we’re talking about decadent levels of impatience, inanity, and time-wasting here, but GIFs allow us to waste less time online—or, rather, to waste it more efficiently.

Weiner also writes that GIFs are great at “reliving and exulting in shared experiences, where zero setup is needed because a familiarity with context is assumed on the part of viewers.”

Tufte pointed to this batch of amazing baseball pitches as a perfect use of the medium. (A baseball pitch also contains the two elements above that Weiner wrote about: “the money shot” and a “familiarity with context.”) It got me thinking about ways in which we could use animated GIFs as not just time-wasters, but as explanations or illuminations… (UPDATE: @adamgoucher sent me this fantastic post of animated GIFs showing the physics of World Series baseball swings.)

I was also reminded of this batch of James Brown dance moves where the .gif-maker sampled pieces of a youtube video, added annotations (“funky chicken,” and “The Boogaloo”), and put them into a photoset, providing a fabulous entertainment, yes, but also suddenly giving us a “Small multiples” information display that Tufte is so fond of:

“Small multiples resemble the frames of a movie: a series of graphics, showing the same combination of variables, indexed by changes in another variable.” (pg. 170, The Visual Display of Qualitative Information)

Tufte has said over and over: “To make comparisons, it’s better to have information adjacent in space than stacked in time.” You can stretch this a bit and fit it to the internet, and certainly the Tumblr dashboard. (Witness this animated GIF of a Clayton Cubitt video getting almost 3x as many likes as the original.) Seems like for maximum effect, it’s often better to have information in space period.

UPDATE: my friend @bonitasarita sent me this PBS Off Book video: Animated GIFs: The Birth of a Medium:

GIFs are one of the oldest image formats used on the web. Throughout their history, they have served a huge variety of purposes, from functional to entertainment. Now, 25 years after the first GIF was created, they are experiencing an explosion of interest and innovation that is pushing them into the terrain of art. In this episode of Off Book, we chart their history, explore the hotbed of GIF creativity on Tumblr, and talk to two teams of GIF artists who are evolving the form into powerful new visual experiences.

Right now, you might wear a Nike Fuelband, a FitBit Flex, a Withings Pulse, or a Jawbone Up. But as neat as these activity trackers may be, their view is inherently limited. It’s from your wrist or waistband. To delve deeper into our own analytics, we’ll need to electrify our clothing. The Sensoria Smart Sock, by Heapsylon, is a wearable electronic that should feel extremely familiar: Because at its heart, the system is a pretty normal-looking sock that you might not even realize was laced with soft textile sensors. These sensors can track precise foot falls in real time, allowing runners to analyze their technique with incredible fidelity. And when the run is over, the socks work like any other garment–just toss them into the washing machine to launder them. (via 1 | Beyond Nike : This Smart Sock Tracks Workouts, And It’s Washable | Co.Design: business innovation design)