Taking the idea that you should know how to make a computer do your will, then framing it as something intended merely for a job, does a massive disservice to the discipline. It bogs down the conversation with ideas of what, specifically, is worth teaching, or the products that students will make, instead of the concepts and fundamentals that can be applied anywhere in life.

What’s this site about?

The response to this site has been overwhelming and incredibly fast. I started this only two days ago and the site already has 2500+ followers and many more views.

I’ve received a lot of emails of support but I’ve also had a lot of fellow VFX artists ask me to at least acknowledge the current issues facing our industry on this site. There’s plenty of excellent coverage out there already (NPR, io9, The Verge, HitFix, and many more) and I encourage you to read it.

So, is this blog a response to the Oscars, and the protest preceding it, and the VFX industry’s turmoil? Well sure, it did prompt its creation, I won’t deny that. The truth is this is blog has been in my head for a while but with all that’s happened in the last two days in the VFX world, I knew now was the time.

But I don’t want this site to be about the plight of the VFX industry.

My intention is to highlight the artistry of VFX by showing you the canvas. At a time when even Hollywood can’t seem tell the difference between Oscar-winning Visual Effects and Oscar-winning Cinematography, I think it needs to be made clear which is which. Without the fantastic VFX work by talented artists, Hollywood films would not be what they are today.

“Mystery, as opposed to mastery. An alternative to domination. A surrender. Mastery subjugates the world to my will, temporarily. Mystery is an encounter with the world, whatever that world is, and with others.” 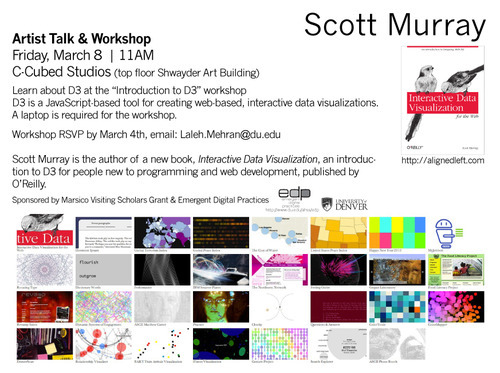 ““The fact that nearly half of the population of Los Angeles has roots in Latin America is so profound that it warrants a major exhibition and research project with accompanying publications,” said Getty Trust head James Cuno. “These are complicated roots, over many generations, and relationships between the U.S. and those antecedent countries have changed considerably over time, so we want to be respectful of those complexities.””

Joshua Davis: “Beyond Play: The Art of Creative Coding”

This is a really great talk about how play isn’t antithetical to work.

so is it orthogonal? I’ve been asking this of play, work, and rigor. I’ll watch and see what Mr. Davis has to say.

This set of Twitter accounts have a little literary and other kinds of fun with, around, and in spite of Ian Bogost’s Twitter account: @ibogost (depicted below). 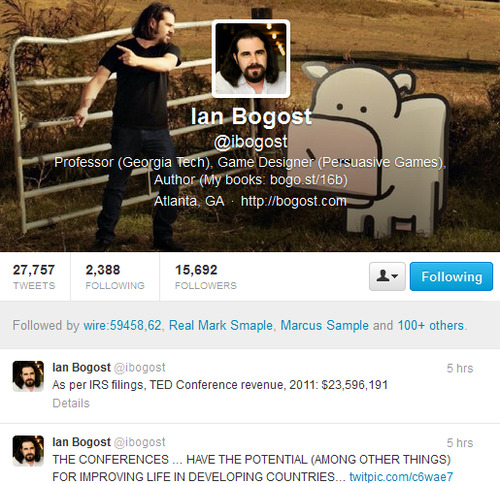 A leading scholar and creator of video games, he has garnered a large Twitter following by voicing his opinions on his areas of expertise and interest, as well as by having a quirky sense of humor and a knack for a well-turned tweet.

It was just a matter of time before a parody account would turn up: @bogost_ebooks. 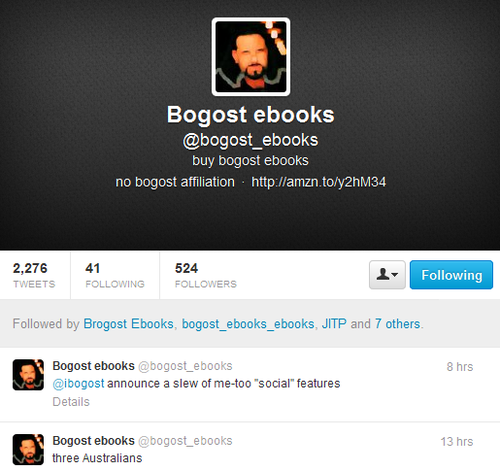 This account seems to use some kind of Markov chain text generator feeding off of Ian Bogost’s Twitter feed and books to generate Bogost-like tweets. At this level, it is a distorted echo, a parody account that engages his writing through Flarf poetry. But this account is not on autopilot: its anonymous performer engages in conversations with Bogost on Twitter, and he has come to accept this account, to the extent that he sometimes invites @bogost_ebooks to respond to questions asked of him.

But it escalates, since other parody accounts based on Ian Bogost have continued to appear, though sometimes very briefly. Two of the most active ones are @bogost_ebooks2 and @brogost_ebooks, both of which engage in conversations with @ianbogost and @bogost_ebooks. 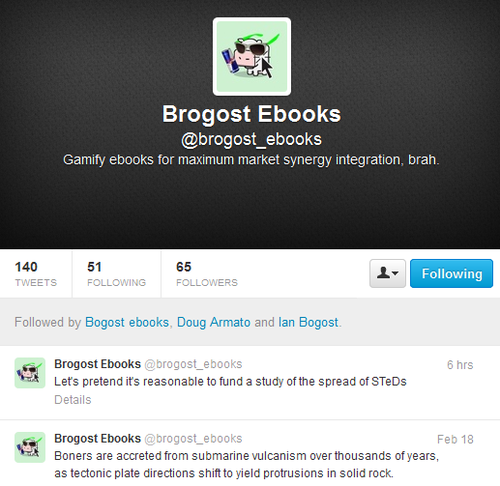 @brogost_ebooks uses a modified icon from Bogost’s game “Cow Clicker” and its description seems designed to irritate Bogost, who has been so consistent in his critique of gamification. Still, it is telling to see that Ian Bogost follows this doppelganger, perhaps to keep tabs on it (though it seems mostly harmless), like most of the other accounts depicted below. 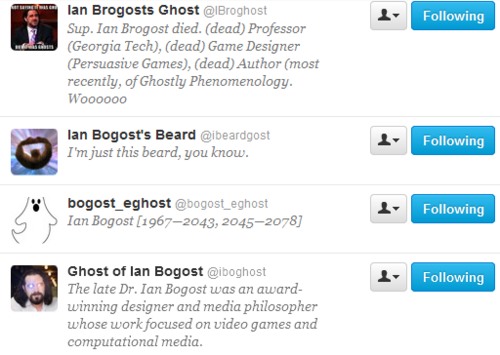 I can think of a parallel going back to Elizabethan England, with Christopher Marlowe’s poem “The Passionate Shepherd to His Love” receiving a response by Sir Walter Raleigh’s “The Nymph’s Reply to the Shepherd” (see both poems juxtaposed for comparison). And it didn’t end there, as poets over the centuries that followed parodied and responded to his poem.

The 140 character constraint on the tweet lends itself to brevity, and Ian Bogost is a master of the pithy statement. It is only fitting that the poetic compression of his language has invited responses. One can think of worse compliments than to be imitated and responded to.