Is art history dead? Is the digital revolution passing art historians by? What is the future of publishing in art history?

We’ll be exploring these topics next week on The Getty Iris, and we’re kicking off with a short Google+ Hangout, “Resuscitating Art History,” on Monday, March 4, at 4:00 p.m. PST.

We’d like to hear from artists, students, art historians, authors, and, especially, art history grad students: Is there there a question the field needs to address? A challenge you face? A radical idea art historians need to be for (or against)? Please let us know here, on Facebook, or via tweet to @thegetty (hashtag: #digitalhumanities).

Books in the Research Library at the Getty Research Institute. 010101 is a real book.

Complexity theorists tend to ascribe to Popper’s (1957) notion that the future is fundamentally unpredictable or at least unknowable for non-trivial systems of interest—in our case human systems—and broadly speaking, the longer the time scale for prediction, the less predictable the outcome. This makes cities— which are about as long term as physical products can get—intrinsically unpredictable. So a future city cannot simply be the built-out product of a creator’s imagination, in the way a building can be. Nor is a city growing like an organism: there is no knowable optimal form of target organism to be steered towards. The idea of the planned city as a knowable utopia is a chimera. Nevertheless, we continue to try to plan in the belief that the world will be a better place if we intervene to identify and solve issues that are widely regarded as problematic. But this must be tempered with an awareness of the limitations of planning, not least through an awareness of the evolutionary nature of urban change.(Marshall 2009:266)

‘The idea of the planned city as a knowable utopia is a chimera.’

Time to Model All Life on Earth

Technology, especially multimedia technology, is changing the way we tell stories. We are all familiar with letters, articles, and books, but new Internet technology has led to two novel forms of storytelling that we call micro stories and mega stories.

Micro stories are the short bits of text and images that we use to tell our friends about our daily life, what we had for lunch, and the funny bits of our day. They are uploaded in the form of text, images, and soon even short videos. All these micro stories represent data that we can then assemble into mega stories about our lives. In addition to the direct data presented, the metadata related to the time, location, user, and the social graph of the creator are all important bits of information that play a key role in these stories. Where are the most popular bars? What are the trending words in our discourse? Where can I find a taxi?

Our use of technology has changed over time. A few decades ago technologists predicted that we would all create our own webpages. When we discovered that HTML was too cumbersome for the average user, the answer became blogs—just start writing. Yet, even short blog postings require significant storytelling ability. Then there were question-answering sites such as Yahoo Answers. Anybody can write a question, and the Web will provide the answer. Now we have services such as Twitter, Facebook, and Instagram that require even less creative effort.

“The business community focuses on managing uncertainty. That’s actually a bit of a canard. In an increasingly turbulent and interconnected world, ambiguity is rising to unprecedented levels. That’s something our current systems can’t handle. There’s a difference between the kind of problems that companies, institutions, and governments are able to solve and the ones that they need to solve. Most big organizations are good at solving clear but complicated problems. They’re absolutely horrible at solving ambiguous problems — when you don’t know what you don’t know. Faced with ambiguity, their gears grind to a halt. Uncertainty is when you’ve defined the variable but don’t know its value. Like when you roll a die and you don’t know if it will be a 1, 2, 3, 4, 5, or 6. But ambiguity is when you’re not even sure what the variables are. You don’t know how many dice are even being rolled or how many sides they have or which dice actually count for anything. Businesses that focus on uncertainty actually delude themselves into thinking that they have a handle on things. Ah, ambiguity; it can be such a bitch.”

Dev Patnaik, cited by Robert Safian in This Is Generation Flux: Meet The Pioneers Of The New (And Chaotic) Frontier Of Business

We are in the Postnormal now, where volatility, uncertainty, complexity, and ambiguity have reached unparalleled heights. We are constantly in a strategy fog, unable to see very far ahead, to plan, or even think about problems and solutions. We live in a time defined by dilemmas: unsolvable situations that can only be coped with, balanced against.

Like a martial artist who knows she may be attacked at any time, by any opponent, with any weapon, the most productive approach is to practice, speculatively, but remain fluid in mind, and unfocused on any specific techniques.

This is why I counsel speculative design as a discipline. Instead of trying to imagine a future world, instead imagine an imaginary appliance of that future world, and its use by the denizens of that future. Then consider the implications of those interactions. That is the equivalent of a karate-do doing kata: we are sparring with the implications of our speculations. 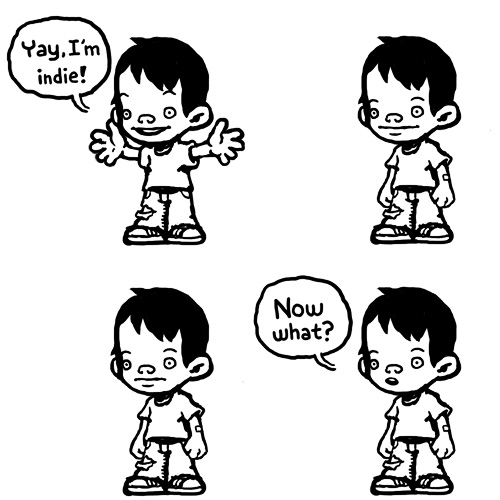 Every now and then someone will ask me for advice on making it as a professional indie game developer. First, it’s a huge honor to be asked that. So I want to say “Thank you!” Second… damn, if I really want to help out it’s a serious endeavor. Of course, I could always say “Give it your best! Work hard! Be true to yourself!” and it wouldn’t be a terrible reply… just not a terribly useful one, either.

So here it is. Here is what I’m going to link when that rare situation arises again, because it’s too much work to write up more than once! This is advice that I feel may actually be practical to someone who is just starting out as an indie game developer. Hope it helps!