If you watched the NBA Finals, you probably saw a couple of Nike commercials where LeBron was moving around the court or through the air as some stats popped up on the screen. As it turns out, those stats were provided by the Nike Hyperdunk Sport Pack ($250). At its core, the Hyperdunk is a solid, Lunarlon- and Flywire-equipped basketball shoe that’s laden with Nike sensors to measure your vertical leap and steps, allowing you to track your highest jumps, average jump height, total jumps per game, steps per second, quickest moments, and more, all through the Nike Basketball app (via Nike Hyperdunk Sport Pack | Uncrate)

The purchase of expensive equipment seems to be determined more often by consumer habits leading to the purchase of only quality products than by a qualitative transformation of the photographic intention. In short, the sophistication of the available means comes to photography from outside; rather than resulting from the appearance of new requirements produced by the practice of photography itself, it expresses a concern to conform to the broad group norm. The aesthetic quality, not to mention the technique, of the picture produced and the modality of the practice, cannot be deduced from the qualities of the camera, its possibilities or limitations, and the routine and stereotyped work produced by most photographers cannot be explained by the limitations imposed on them by an unsophisticated camera or their own technical incompetence; instead, it is the photographic intention itself which, by remaining subordinate to traditional functions, excludes the very idea of fully exploiting all the camera’s possibilities, and which defines its own limits within the field of technical possibilities.

becoming wave: ourcatastrophe: concerns about book fetishisation aside, I am actually…

becoming wave: ourcatastrophe: concerns about book fetishisation aside, I am actually…

concerns about book fetishisation aside, I am actually mostly in favour of large personal book collections. I have several hundred books on my shelves and another 200-odd at my parents’ house that I could reclaim if I wanted to. the house I grew up in has a couple thousand…

As independent bookstores crash and burn in the United States and Britain, the book market in France is doing just fine. France boasts 2,500 bookstores, and for every neighborhood bookstore that closes, another seems to open. From 2003 to 2011 book sales in France increased by 6.5 percent.

Zajal is a programming language designed to reduce the friction between creative vision and functioning software. Live coding allows artists to improvise code and experiment freely, turning programming into an act of sculpture rather than architecture.

met Ramsey at eyebeam today. Software looks amazing. I am very excited to try this out.

This should mean it is also possible to create inkjet printable batteries./

Spray on Paintable Batteries and Spray on Solar Power for Windows

Researchers at Rice University have developed a lithium-ion battery that can be painted on virtually any surface.

The rechargeable battery created in the lab of Rice materials scientist Pulickel Ajayan consists of spray-painted layers, each representing the components in a traditional battery. The research appears today in Nature’s online, open-access journal Scientific Reports. Technique could turn any surface into a lithium-ion battery; may be combined with solar cells.

Underpaid Genius: The World Is Burning

Underpaid Genius: The World Is Burning

Bill McKibben says very well what a great number of climate observers are saying: the world is burning. 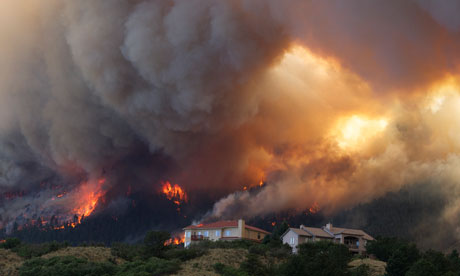 While Colorado burns, Washington fiddles – Bill McKibben via the Guardian

You ever wonder what global warming is going to look like? In its early stages, exactly like this.

Idleness is not just a vacation, an indulgence or a vice; it is as indispensable to the brain as vitamin D is to the body, and deprived of it we suffer a mental affliction as disfiguring as rickets. The space and quiet that idleness provides is a necessary condition for standing back from life and seeing it whole, for making unexpected connections and waiting for the wild summer lightning strikes of inspiration — it is, paradoxically, necessary to getting any work done. “Idle dreaming is often of the essence of what we do,” wrote Thomas Pynchon in his essay on sloth. Archimedes’ “Eureka” in the bath, Newton’s apple, Jekyll & Hyde and the benzene ring: history is full of stories of inspirations that come in idle moments and dreams. It almost makes you wonder whether loafers, goldbricks and no-accounts aren’t responsible for more of the world’s great ideas, inventions and masterpieces than the hardworking.

The problem is this: neither the Obama White House nor the Obama campaign will make such a game. That’s not because the designs are bad; ironically, it’s because they are good. As I’ve argued before, the representation of policy choices and their outcomes is anathema to politics, because the latter is concerned more with politicking than with policy, with campaigning over legislating. This is a different sort of failure to communicate, one rooted in the widespread misconception of politics as a matter of professionals getting, keeping, or losing their jobs, rather than citizens living in (hopefully) better and better communities.

I am trying to get electronic access to an article from 1990. I cannot do so. This is normal. Except it’s ridiculous. Why? Because the article was published in the journal I currently work for. I can’t even get to it through the backend.