In this project from AND-OR, real bricks fall out of the tetris game as the player completes a line (onscreen). When the machine runs out of bricks, it’s up to the player to pick up the bricks from the floor and refill the game.

In this project from AND-OR, real bricks fall out of the tetris game as the player completes a line (onscreen). When the machine runs out of bricks, it’s up to the player to pick up the bricks from the floor and refill the game.

I just spoke with a young man from your office, who informed me that I had been chosen to be one of twelve recipients of the National Medal for the Arts at a ceremony at the White House in the fall. I told him at once that I could not accept such an award from President Clinton or this White House because the very meaning of art, as I understand it, is incompatible with the cynical politics of this administration. I want to clarify to you what I meant by my refusal.

Anyone familiar with my work from the early Sixties on knows that I believe in art’s social presence—as breaker of official silences, as voice for those whose voices are disregarded, and as a human birthright.

In my lifetime I have seen the space for the arts opened by movements for social justice, the power of art to break despair. Over the past two decades I have witnessed the increasingly brutal impact of racial and economic injustice in our country.

There is no simple formula for the relationship of art to justice. But I do know that art—in my own case the art of poetry—means nothing if it simply decorates the dinner table of power which holds it hostage. The radical disparities of wealth and power in America are widening at a devastating rate. A President cannot meaningfully honor certain token artists while the people at large are so dishonored.

I know you have been engaged in a serious and disheartening struggle to save government funding for the arts, against those whose fear and suspicion of art is nakedly repressive. In the end, I don’t think we can separate art from overall human dignity and hope. My concern for my country is inextricable from my concerns as an artist. I could not participate in a ritual which would feel so hypocritical to me.

Adrienne Rich’s “Final Notations” is included in The Open Door: One Hundred Poems, One Hundred Years of Poetry Magazine, forthcoming this fall.

Google+ solves Google’s big problems, at least in theory. It delivers a social network—arguably better constructed Facebook—that lets it understand the connections between people. It also lets Google tap into a stream of real-time data, and build a search system around that without having to worry that it will ever be left at the altar. And it does so much more, too! It has real time photos, like Instagram. It has a video chat service, like Skype. It lets you see which businesses your friends recommend, like Yelp. It’s a one size fits all solution, and what’s more it’s on the open Web. Perfect!

One problem: People don’t really want to use it. They’re already entrenched in other stuff. Many of Google’s recent actions can be explained by understanding that dilemma. Google wants to know things about you that you aren’t already telling it so you will continue asking it questions and it can continue serving ads against the questions you ask it. So, it feels like it has to herd people into using Google+ whether they want to go there or not.

Google has to get you under its tent, and break down all the silos between its individual products once you’re there. It needs you to reveal your location, your friends, your history, your desires, your finances; nothing short of your essence. And it needs to combine all that knowledge together. That’s Search Plus Your World. “Your World” is not just your friends, or your location. It’s your everything. The breadth of information Google wants to collect and collate is the stuff of goosebumps.

– Mat Honan,  The Case Against Google

Google would like to be the next great thing, the bridge into the future, but instead they are failing to deliver breakthrough technology, despite all their edvantages and huge cash reserves. And realizing it, they have become so desperate, and cavalier about a world dominated by user experience that they will wind up chasing us away.

Google is the new Microsoft.

Collusion is an experimental add-on for Firefox and allows you to see all the third parties that are tracking your movements across the Web. It will show, in real time, how that data creates a spider-web of interaction between companies and other trackers.

The Barbie maker will produce the not-for-retail doll following a social media campaign.
Mattel’s hairless fashion doll will be distributed exclusively to children’s hospitals and other hospitals treating children with hair loss in the US and Canada.
The doll, who will be a friend of Barbie’s, will come with wigs, hats, scarves and other fashion accessories which will be made available to offer girls a traditional fashion play experience.
In a statement, Mattel said: “We made the decision not to sell these dolls at retail stores and profit from them, but rather more directly and immediately get these into the hands of children who can most benefit from a play experience with these dolls.
"This decision demonstrates Mattel’s commitment to encourage play as a respite for children in the hospital and bring joy to children in need. Mattel’s ongoing commitment to extending play to children occurs through our dedicated support of a variety of children’s organizations and needs through a multitude of philanthropic activities.”
To date, the Beautiful and Bald Barbie! Facebook group has attracted over 150,000 Likes while its associated petition has attracted close to 35,000 signatures. Article continues below
Advertisement The group’s mission statement reads: “We would like to see a Beautiful and Bald Barbie made to help young girls who suffer from hair loss due to cancer treatments, Alopecia or Trichotillomania. Also, for young girls who are having trouble coping with their mother’s hair loss from chemo. Many children have some difficulty accepting their mother, sister, aunt, grandparent or friend going from long haired to bald.” (via Mattel to make a hairless fashion doll for children in hospital | Toy Industry | News by ToyNews)

This Arduino Finger print sensor makes me want to make a diary that only opens for you.

Alan Turing is the father of computer science. He is largely responsible for development of the Turing-Welchman bombe, which effectively cracked Enigma-encoded messages during WWII. He created a formal definition of the algorithm and created the Turing machine. Without him, we may not have computers as we know them to be today.

In 1952, Turing was arrested in the UK for being gay. Instead of serving prison time, he chose the alternative– chemical castration through estrogen therapy. He lost all of his security clearance and could no longer work on his life career of cryptology as a result.

Turing’s favorite children’s tale was Snow White and the Seven Dwarves. In 1954, he was discovered dead in his bedroom. He had committed suicide by eating an apple soaked in cyanide. A memorial for Turing depicts him holding an apple- a symbol for forbidden love. In 2011, a petition was made asking the British Government to pardon Turing’s conviction of gross-indecency. It was rejected by Lord MacNally, who summarily stated Turing knew his actions would result in a criminal offense and therefore should have been prosecuted.

Mr. Turing, I’m sorry. The world can be a cruel place. You are respected and won’t be forgotten. The same can’t be said of many. 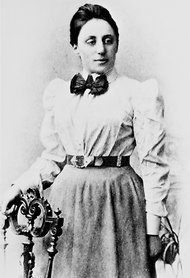 Excerpt: Albert Einstein called her the most “significant” and “creative” female mathematician of all time, and others of her contemporaries were inclined to drop the modification by sex. She invented a theorem that united with magisterial concision two conceptual pillars of physics:…

As you can imagine, the trick here is activating individual neurons, which are incredibly small and not really the kind of thing you can attach electrodes to. To do this, the researchers used optogenetics, a bleeding edge sphere of science that involves the genetic manipulation of cells so that they’re sensitive to light. These modified cells are then triggered using lasers; you drill a hole through the subject’s skull and point the laser at a small cluster of neurons.

(via MIT discovers the location of memories: Individual neurons | ExtremeTech)

the eternal sunshine of the spotless mind