“Most people on Zazzle are actual people, making products, one at a time, for themselves, as gifts or to make a modest buck. Trolling through Zazzler forums, one reads again and again the hard-learned lesson of techno-capitalism that a hundred terrible shirts invariably will make more money than ten good ones. Here arises a mutant breed of Zazzler—representing a tiny minority of its members but a disproportionately large number of products—marrying the production line and the bottom line with the command line and developing programs that to varying degrees automate their design process, producing tens of thousands of products with little or no human oversight or labor.”

(via KAROLINA SOBECKA) visiting the University of Denver this week.

Sniff is now installed in our C-cubed Studios. Karolina is giving us a behind the scenes glimpse at how the work behaves.

(via KAROLINA SOBECKA) visiting the University of Denver this week. 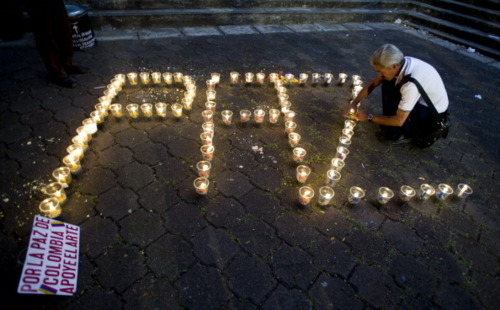 A man lights a candle among others forming the word ‘Peace’, on January 26, 2012 in Cali, Colombia, during a tribute to the FARC hostages who died in captivity. (Photo /Luis Robayo/AFP/Getty Images)

by the Associated Press

BOGOTA, Colombia (AP) — Colombia’s main rebel group says it will free the last of the government captives it has held for years. It also says it will abandon the practice of kidnapping.

(…) It’s upsetting to watch, but this is one of the great “Fuck You” moments in popular music history. Instead of just leaving the stage, she rubs the audience’s face in what she had done. Her bravery is astonishing.

What crime briefly made her the most hated woman in America? She had the audacity to protest the way the Catholic Church, all the way up to the top, had overlooked and covered up the sexual abuse of children. Years later, we’d all learn just how right she was. But at this moment, almost no one was on her side. Imagine how lonely she must have felt up there. A singer at a tribute to Bob Fucking Dylan is booed off the stage for an act of protest against the rich and powerful’s role in the exploitation of the weak and invisible. It was a different time. We were just about to come out of 12 years of Reagan and Bush I.

So true. I’m forever on Team Sinead for this and the SNL performance. I recently torrented the original SNL episode, and it’s absolutely stunning how silent the crowd was after she tore up the Pope’s photo. Not a gasp, not a boo, not a cheer, nothing. Just stunned silence. I think Tom Shales’ book mentions that Lorne Michaels ordered the episode’s director not to turn on the “Applause” sign when she did what she did. Apparently she tore up a different photo in the run-through? Can’t quite remember.

A couple other reactions bear mention: Tim Robbins, that evening’s host, didnt’ even acknowledge her in the good-nights. Didn’t even look at her or mention her name, and she’s standing right next to him. Tim Robbins! Then it got worse the next week, with Joe Pesci. His “hey I taped the photo back together” stunt was fine, but then he said, “if it was my show, I’d have gave her such a smack!”, at which point the audience applauded. Seriously. A round of applause for a man threatening physical violence against a woman who had made a gesture trying to draw attention to child abuse in the Catholic church. Crazy.

Again: Team Sinead forever. When she walks away from the mic after the above performance, she seemed absolutely fine—no doubt still on a high—until Kris Kristofferson grabs her in his unnecessarily paternalistic way (I think he said “don’t let the bastards get to you” or something?), at which point she seems to break down. Which makes sense.

Also: what a voice.

At this time, many young Iranians all over this world are watching us, and I imagine them to be very happy. They are happy not just because of an important award, or a film or a filmmaker, but because at the time, in talk of war, intimidation and aggressions exchanged between politicians, the name of their country, Iran, is spoken here through her glorious culture — a rich and ancient culture that has been hidden under the heavy dust of politics. I proudly offer this award to the people of my country. A people who respect all cultures and civilizations, and despise hostility and resentment.

@stoweboyd: To think outside of the box, you first need a box http://t.co/N4uNLEKm How metaphor and embodied cognition impact innovative thinking.

I have been curious about the interaction – if any – between Lakoff, Bordiue [sic], and de Certeau [sic?].

On February 26, 1939, in a dramatic act of conscience, Eleanor Roosevelt resigned from the Daughters of the American Revolution (DAR) when it barred the world-renowned singer Marian Anderson, an African American, from performing at its Constitution Hall in Washington, DC.

AOL’s Tim Armstrong Knows How to Play Nice With Others – Andrew Goldman via NYTimes.com

AOL’s Tim Armstrong Knows How to Play Nice With Others – Andrew Goldman via NYTimes.com

Goldman: AOL is a brand with a lot of baggage. It makes people remember that dial-up-modem sound and those free CDs.

Armstrong: One of AOL’s biggest assets is its brand. For people over 30 and, due to AOL Instant Messenger, even a lot of people under 30, AOL was their first real interaction with technology in a positive way.

Goldman: You’ve decided to turn it into a content company. But a year after spending $340 million to acquire the blog TechCrunch and The Huffington Post, traffic has barely budged.

Armstrong: Traffic actually is going way up on the properties where we’re investing for the future and pushing content. Huffington Post is up 46 percent. Numbers have been going down on some of the historical stuff: AIM went down, MapQuest went down and dial-up subscribers go down every year. So flat is up for us.

How can you counter that? Flat is the new up, Tim?

The brutal reality is that people’s aggregated media experience is rapidly shifting, and the rate of drift appears to be increasing. For example, TV sports grew 21% between ‘07 to ‘11, 15% more than TV as a whole. ‘Going to the movies’ is starting to look like a future vaudeville, with ‘11 US tickets falling to 1.29B, from the ‘02 peak of 1.5B.

People are spending their time looking at other things than AOL’s Patch. Oh, and Techcrunch US numbers have dropped like a rock, too, down ~40% in the past year. Huffington Post is booming, so I guess Goldman’s gibe — citing Paul Carr’s belief that Ariana HuffPo will be running AOL soon — might actually have merit.