(via Kinekt Design) via Boing Boing

Obviously Quidditch, but being able to let go of rules long enough to play Calvinball would be pretty incredible too.

What fictional game would you play?

Is She or Isn’t She?

on Margaret Atwood and the S and F words. 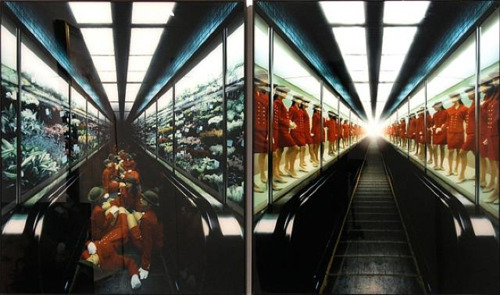 Margaret Atwood
In Other Worlds: SF and the Human Imagination
New York: Doubleday/Nan A Talese, 2011. 255 pp.

There are a few problems here, which may take a few minutes to sort through before we can get down to the gist of this slender volume.

Many of her casual readers, and most critics of her work, are aware by now that Margaret Atwood got herself into a spot of bother after the publication of her pulpish dystopia Oryx and Crake (2003), when she disassociated her text from the conversation of SF, the underlying megatext of conventions, phrases, solutions, tags and cliches which honest Science Fiction writers both acknowledge and make new in their works, and which has evolved enormously over the years. Despite her conspicuous use of SF topoi copied holus-bolus as they existed half a century ago — i.e., the Superman Mad Scientist who Ends the World while Simultaneously Creating a New Species to inhabit the remains — she claimed in 2003 that what she wrote was not Science Fiction at all, because Science Fiction was all about squids in space. What she was really writing was something decently grown-up, something akin to Speculative Fiction of a utopian/dystopian bent. In 2003 this reviewer (for one) waxed enthusiastically indignant — given the patently condescending disingenuousness of what she said — about what seemed not so much misprision as trahison des clercs. I argued that a person who had attained a public voice had a public responsibility, as a member of a clerisy whose voice could be heard for good reason, not to allow offhand comments to be understood as discourse. Solipsism in a Clerk — clerisy being the committee of the whole of the literate members of a conversing society — is a form of tyranny.

In 2003, Ursula K. Le Guin — a writer of singular importance to the field not only for her fiction but for her critical work — made it clear that the squids-in-space bon mot was genuinely discourteous. But her measured rebuke seems to have made little difference. Atwood has now reiterated her claim almost unmodified, in her latest book, In Other Worlds: SF and the Human Imagination. It may be that like a lobster in a trap who cannot find the exit door, Atwood cannot work her way out of the perplex of ill-judged subjectivity in which she had trapped herself: perhaps because, as with any statement of belief as opposed to argument, her “definition” of SF is as unfalsifiable as any sermon.

Developed by UK-based Captive Media, the high-tech urinals come with 12-inch LCD screens fitted just above them. Ads play on the screens until a punter approaches the urinal. Detecting that the punter is in position and ready to pee, the system then switches into gaming mode.

sometimes often the best thing that can happen to ideas you have is that without knowing you even exist, someone else goes ahead and makes them happen.

The story of stuff: “99% of the stuff we run through the system [the system of consumption] is trashed within 6 months.”

From its extraction through sale, use and disposal, all the stuff in our lives affects communities at home and abroad, yet most of this is hidden from view. The Story of Stuff is a 20-minute, fast-paced, fact-filled look at the underside of our production and consumption patterns. The Story of Stuff exposes the connections between a huge number of environmental and social issues, and calls us together to create a more sustainable and just world. It’ll teach you something, it’ll make you laugh, and it just may change the way you look at all the stuff in your life forever. http://storyofstuff.org

DiceForChange is a concept designed to help you start and act on what you care about. Simply roll the dice to introduce new routines into your life in a playful way and notice how even small and simple actions have a greater positive effect on life.

Barthes vehemently opposes the view that authors consciously create masterpieces. He maintains that authors such as Racine and Balzac often reproduce emotional patterns about which they have no conscious knowledge. He opposes the view that authors should be interpreted in terms of what they think they’re doing. Their biographies have no more relevance to what they write than do those of scientists. In ‘The Death of the Author’, Barthes argues that writing destroys every voice and point of origin. This is because it occurs within a functional process which is the practice of signification itself. Its real origin is language. A writer, therefore, does not have a special genius expressed in the text, but rather, is a kind of craftsman who is skilled in using a particular code. All writers are like copywriters or scribes, inscribing a particular zone of language.

map this onto “everything is a remix”.

According to this reading of myth, a myth occurs only if someone is a true believer who consumes the myth innocently. This is why, for certain later writers, a postmodern ‘ironic’ reading, which recognises and plays with the constructedness of myths, is deemed subversive. It is also why ironic uses of stereotypes are sometimes differentiated from their simple deployment. And why the ‘play’ of signs in fields such as the Internet, or reader-response models of global culture, where each user is aware they are appropriating and redeploying signs, is sometimes seen as progressive even if the signs deployed are capitalist, conventional, racist, etc. Barthes sees myth as functioning in a similar way to Althusserian interpellation. It calls out to the person who receives it, like a command or a statement of fact. The content of the injunction is to identify the sign with the essence.

An A to Z of Theory Roland Barthes’s Mythologies: A Critical Theory of Myths | Ceasefire Magazine via Imp Kerr

David Chalmers, however, argues that materialist reductionism of the Churchlands’ type throws out too much, and cannot deal with the fact that humans enjoy sunsets. Chalmers agrees with Thomas Nagel that there is something that it feels like to be a bat, or a human, but there may be nothing that it is like to be a TV set. (Computers are left an open question).

No mention of OOO