(via The Emerging Epicenters of High Tech Industry | Magazine | Wired.com)

“The simplest and most radical thing that Ridley Scott did with Blade Runner was to put urban archeology in the frame. I(t) hadn’t been obvious to mainstream American science fiction that cities are like compost heaps — just layers and layers of stuff. In cities, the past and the present and the future can all be totally adjacent. In Europe, that’s just life — it’s not science fiction, it’s not fantasy. But in American science fiction, the city in the future was always brand-new, every square inch of it.” 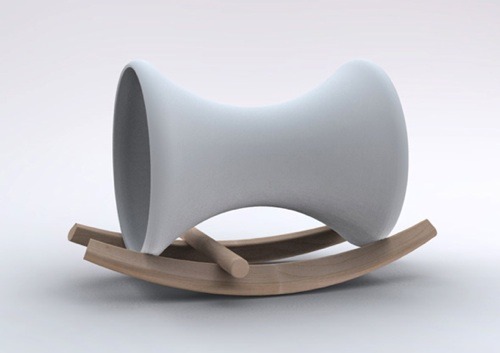 London design studio Doshi Levien has created the Rocker for Richard Lampert – a minimalistic household object, which is essentially an improvised rocking horse, intentionally shying away from a figurative form in order to capture the imagination of children.

new series in Digital Research in the Arts and Humanities (Ashgate)

Digital Research in the Arts and Humanities (Ashgate)

Digital technologies are increasingly important to arts and humanities
research, expanding the horizons of research methods in all aspects of
data capture, investigation, analysis, modelling, presentation and
dissemination. This important series covers a wide range of disciplines
with each volume focusing on a particular field, identifying the ways in
which technology impacts on specific subjects. The series provides an
authoritative reflection of the ‘state of the art’ in the application of
computing and technology. Each book is critical reading for experts in
digital humanities and technology issues, and will also be of wider
interest to all scholars working in humanities and arts research.

For the current nine titles in the series and call for additional
proposals, see http://www.ashgate.com/digitalresearch.

Hes special in his own way

The emergence of a new object of study or creation should always be seen as an opportunity to change the way that all academic disciplines — and the institution itself — work. When a new discipline emerges, universities should experiment with mechanisms that allow this new discipline to produce art, scholarship, archives, and teaching in the most flexible ways possible. Failure in the first few years should always be as much an option as success.
In an era that applauds scholarly and artistic interdisciplinarity in the Humanities, there are very few administrative reward mechanisms in the university system that encourage faculty collaboration. In fact, universities tend unconsciously to perpetuate disincentives: a multi-authored book, for example, tends to confer less credit on its writers than a single-author book. A new discipline can redefine for itself — and perhaps for other disciplines — the way in which significant original work is evaluated.
The relationship between the various campus constituenties may be refigured. Librarians, IT personnel, and graduate students may become more present in the decision-making process of the discipline once the significance of IT is reified.
A new discipline has the opportunity to change the disciplinary economy, for example by being allowed to seek funding outside campus sources, or by deciding that graduate students should be better remunerated.
Funding a new discipline should be a very high priority, especially when, as now, funding is unusually scarce as a consequence of external circumstances over which the university has no control. Special consideration should be given a new field of study in the forms of both greater internal institutional support and more vigorous efforts to raise funds externally (i.e.: private donations and academic grants).
II. Issues specific to the establishment of New Media Studies. Interdisciplinarity: NMS may be the first discipline that requires a genuinely interdisciplinary faculty, from historians, critics and theorists of New Media in art, philosophy, literature, history and other Humanities disciplines, to anthropologists, to Computer Scientists who are interested in programming itself as, in part, an issue of culture and representation. Understanding NMS in this way reduces the “silo” effect in the academy.
In fact, New Media interdisciplinarity promises to redefine “Humanities discipline.” As the archive becomes an ever more central theoretical and practical concern, librarianship and curatorship may become much more central sources of interesting scholarship and creativity in the Humanities. Further, a discipline whose object of study is also its evolving medium of communication (digital representation) might ideally produce a hybrid category within the ranks of the IT force: the IT Scholar.
III. Issues specific to New Media Studies at The University of Colorado, Boulder. The establishment of NMS at CU Boulder affords the opportunity to found an interdisciplinary institutional unit devoted to this object of study.
NMS should have direct access to the fundraising arm of the university: The Foundation.
NMS should not become a “service teaching” department. CU Boulder has a plethora of digital media teaching and teaching-aid outlets: The Arts and Sciences Support of Education Through Technology (ASSETT), ATLAS, and The Faculty Teaching Excellence Program (FTEP), for example. Therefore, while NMS may, like most other academic departments, take on teaching duties, some special care should be taken to ensure that the creation of scholarship and art are attended to.
Whatever institutional form NMS finally takes, its hiring, research and teaching activities should be determined by NMS faculty, as is the case for most disciplines and departments.

Could we engage ‘Digital Humanities’, with its separate IT staff who will deal with the technical details for clueless arts and humanities scholars? The concept of Digital Humanities might be useful for retiring linguists but is deadly for the media studies environment. The humanities itself should try to overcome its distance from computer science and attack the sciences head on for its privileged position in terms of funding. Digital Humanities maintains to be working in collaboration with computer engineers but the problem is they retain a classic division of labor , which totally goes against transdisciplinary knowledge production. What we need is to move away from expert dependent high-end tools to broad-based undergraduate programs. We do not need massive budgets, but the Digital Humanities only work with high-end institutions and hide themselves behind the smoke screens of large datasets. The ‘digital’ is revolutionizing humanities itself and should not be downgraded as servitude to the IT staff and their authoritarian imaginations.